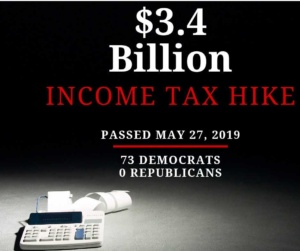 “Illinois managed the first 150 years of its existence without an income tax. Other states avoid it – Texas, Tennessee, Florida – and their economies are skyrocketing. The notion that we need this Amendment going forward is a lie. It is a lie that this is a fair tax. The top income earners in this state already pay the largest percentage of overall taxes. The legislature is creating a tax system where the politically privileged win and ordinary people lose. It is a lie that it will solve our budget problems. The State received a billion dollar windfall in tax revenues in April, but that windfall disappeared before it even hit our state coffers.

“It will take one year of revenue to figure out that ‘soaking the rich’ only provides so much extra revenue, and we’re still deficit spending. It will not be enough, when this body’s desire to spend is so insatiable.  Springfield Democrats will be pulling copper wire out of the last pennies of hard working families and workers in Illinois and it still will not satisfy them.”

“There are constitutional reforms with true broad bipartisan support in the real world, including fair maps, term limits, and pension reform. It is sad the only one Springfield Democrats are willing to put to the voters is a new tax increase.”

Since SJRCA 1 successfully cleared both the Illinois House and Senate it will appear on the 2020 General Election ballot. If 60% or more of voters approve the referendum, the Illinois Constitution will be amended.