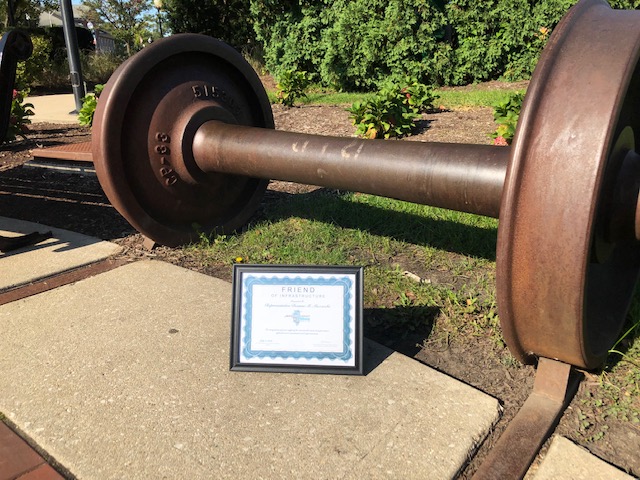 Westmont…To recognize the work of State Representative Deanne Mazzochi
(R-Elmhurst) during the 2019 legislative session, the Transportation for
Illinois Coalition (TFIC) presented Representative Mazzochi with its ‘Friend of
Infrastructure’ award on Tuesday.

Jennifer Morrison,
Managing Director for the TFIC, presented the award at a ceremony held at the
Westmont train station in heart of the 47th District. “The members
of the Transportation for Illinois Coalition are grateful for the leadership of
Rep. Mazzochi and many of her colleagues.
With the passage of this plan to provide sustainable and stable
investment in our roads and bridges, transit and rail systems and our airports,
Illinois policy makers provided taxpayers with a clear and forward-thinking
plan to make improvements for safer, more comfortable commutes and an improved
economy. This sets Illinois on a solid path to a better future.”

During
the ceremony, Mazzochi thanked the TFIC for acknowledging her policy work on
transportation issues, and reiterated the importance of a solid infrastructure plan
to a thriving local and regional economy.  “As a member of the Capital
Appropriations committee, it was tragic to see so many of our roads, bridges, or
buildings literally crumbling or unsafe.
Illinois has not had a major capital infrastructure package since 2009,
and even some of those projects were still not done.”

Mazzochi emphasized the importance of bringing “much
needed road and rail improvements to our district and our state.  Our local municipalities rely on rail
stations; the stations support greener transit-oriented housing, and the
activity helps keep businesses in our downtown cores healthy and thriving.  Our state is the transportation hub of the
country, and we cannot afford to lose our status as a transportation leader.”

Mazzochi observed, “correctly-done capital investments can
support thousands of Illinois jobs and spark much
needed economic growth.  Our
office has repeatedly received road and rail-related complaints, and I am
committed to addressing those issues to improve our local quality of
life.”

To that end, Representative Mazzochi will host two
Transportation Town Halls next week, one in the meeting room at 1 S. Cass Ave.
in Westmont on October 15, and one at Elmhurst City Hall on October 17.  “Illinois road and rail agencies have secured
over a billion dollars in future capital funding; now we need to ensure that
those agencies actually deliver improved facilities and services, whether
better parking; added safety; or avoiding train delays to improve our
residents’ transportation needs.”

Mazzochi and Morrison were joined at the Westmont station by Westmont Chamber of Commerce Executive Director Larry Forrsberg, Westmont Village Manager Steve May, and Bresha Brewer of IRTBA, Todd Britt of Metra, Ally Fields of CMT engineering, Rebecca Mason of the Infrastructure Council of the Illinois Chamber, Walt Nashert of Ozinga, Claire Serdiuk-Anderson of the RTA, Brian Umbright of EXP.

Following the award presentation, the group toured the station, viewed areas that have fallen into disrepair, and discussed infrastructure needs throughout the 47th Legislative District.