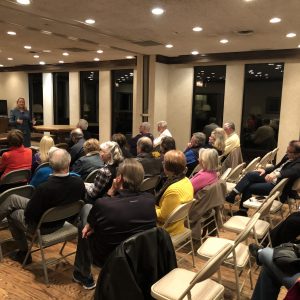 State Representative Deanne Mazzochi met with approximately 50 members of the Grau Mill Homeowners Association (GMHA) in Hinsdale, Monday evening. The members wished to discuss issues of importance to them during this election season.

In a town hall-style meeting, Mazzochi offered a recap of her background and experience as a scientist, attorney, and her current position of State Representative of the 47th District. Citing her legal practice, her husband’s development firm and as Chairman of the Board of Trustees at College of DuPage, she’s steadily gained extensive feedback, knowledge and experience that has heightened her awareness of areas that matter most to voters. Several concerns are prioritized, including taxes, healthcare, real estate, transportation, education, and manufacturing. “ I plan to use this knowledge to help Illinois turn around – using the skills I have, and some I’ll be adding, based on what our residents needs are” Representative Mazzochi said.

Deanne feels a real connection to Illinois. Her ancestors settled in the state more than 150 years ago. During the GMHA meeting, she emphasized that after finishing law school and living abroad for a short time, she came back to Illinois to raise her family. ” I want for my children and everyone else’s children, to have the same wonderful experience I had growing up in DuPage County.” Adding, “It’s important that Illinois repair itself and become fiscally responsible. We should be a state where people want to migrate into not out of because of high taxes, insufficient public services, and irresponsible government.”

Recently, while visiting residents in Hinsdale, a gentleman echoed that point. As the owner of a manufacturing company he shared his frustration that because of Illinois’ high taxes, his company was forced to move across the border to Indiana. This move took 200 jobs with it across the state line.

”That’s just not acceptable”, Representative Mazzochi said, “we must reverse this trend and get Illinois back on track so that we are the state where people want to live, work, invest in or expand a business, and raise their families.”

A key part of the solution is to force government to be fiscally responsible with taxpayer dollars.

Representative Mazzochi referred to her own initiative at the College of DuPage, where, as the Chairman of the Board of Trustees, she led the college in making changes with a high enough impact to turn the college around. “We were able to put a stop to ‘pay to play’ practices and introduced competitive bidding. That alone saved taxpayers $20 million,” she said. “ When you do things the right way, for the right purpose you can really be proud of what you do and it becomes contagious,” she added.

What drives Deanne is a sense of fairness, ethical behavior and doing what’s right for the people of Illinois. “I want to make sure we actually have a government that’s looking out first for the people it serves, not itself. That’s what it means to have citizens governed by ‘We the People’, and not by career politicians.”

“She is very smart, very direct and very honest,” said a resident following the meeting.

“Deanne is no-nonsense, and she knows what she’s talking about,” added a neighbor as she walked by.